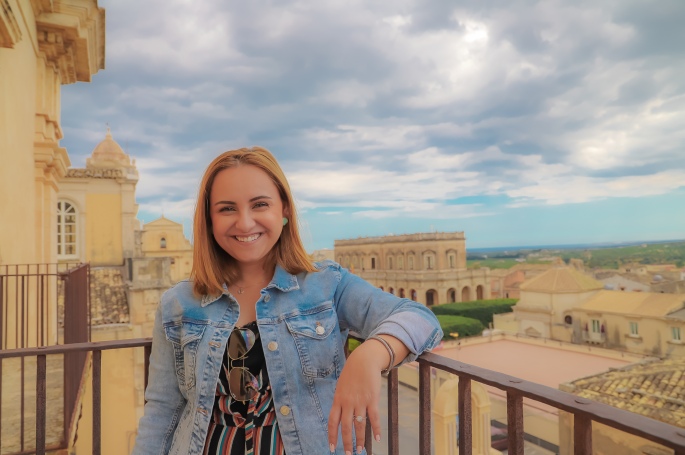 Back in June this year I visited the beautiful island of Sicily. My sister lives in Ragusa, an UNESCO World Heritage site, not far from the sea and so many beautiful places like Syracuse, Taormina, Merzamemi. But more about those in a future article.

Our first stop was Noto voted the Capital of Baroque, a beautiful town 40 km South of Syracuse, also an UNESCO World Heritage site.

The Porta Reale is the access to the historic center of Noto. It was built in 1838 with the arrival of King Ferdinand II of Bourbon in Noto. The door in neoclassical style was built with the typical golden limestone that was used in the construction of churches and palaces and which gives the buildings a yellowish hue.

Cathedral of San Nicolo is a Roman Catholic cathedral located on the main street, Corso Vittorio Emanuele and it’s the most important attraction in Noto. Its construction, in the style of the Sicilian Baroque, began in the early 18th century and was completed in 1776. The cathedral of San Nicolà is the most important place of worship in Noto and it is dedicated to San Nicolò of Mira.

Opposite the Cathedral, Palazzo Ducezio serves today as the city hall. Its construction started in 1746 by Vincenzo Sinatra who was inspired by the French castles of the epoque and was completed in 1830. Inside the palazzo you can visit the Hall of Mirrors which unfortunately was closed when we were there. The palace and the cathedral are the main attractions of the city and the place will leave any tourist mesmerized by the impressive Baroque architecture.

Just around the corner from the Cathedral, Palazzo Nicolaci is another popular spot in Noto. Built in 1736 as a private noble house, it belonged to the Nicolaci family, until it was partially sold to the government of Noto. The Baroque building has 90 rooms and some of them are opened to the public. The facade is decorated with opulent balconies with curvy wrought iron balustrades, decorated with statues of mermaids, sphinxes and winged horses. I was impressed by the ballroom in particular and the view of the Palazzo Ducezio from one of the balconies. It is opened to the public all year round and the entrance was 8 euros.

Overlooking Piazza XVI Maggio with its impressive façade, San Domenico Church is a must see for its beautiful Sicilian Baroque style.

If my pictures haven’t convinced I’m sure my vlog will! Thanks for watching and please subscribe.